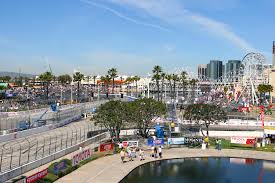 Bright new renderings have been released showing off the $11.3M, 605-foot long pedestrian bridge under construction along Seaside Way in DTLB.

Construction officially started back in late May and will connect the Long Beach Convention’s west-facing walkway and esplanade all the way to the Performing Arts Center.

Inspired by the break of a wave, the bridge will have a glass-and-metal canopy that is lit by LED lights at night and paved with greenery and phone charging stations under its roof.

“The bridge will serve as a landmark within the Convention Center Complex and greater downtown area,” stated Mayor Robert Garcia. “It will help our economy by stimulating tourism in Long Beach and by making it easier for conventioneers to access the Peforming Arts Center.”

As for the cost, of which $9.3M of the total is due to construction alone, the Tidelands Operations Fund will fund the project given the project sits south of Ocean. (Tidelands funds are solely designated for the space at our marinas, beaches, and waterways, including the Convention Center, the Queen Mary and adjacent properties, the Aquarium of the Pacific, and Rainbow Harbor.)

Local knowledge: ★★★★★ Process expertise: ★★★★★ Responsiveness: ★★★★★ Negotiation skills: ★★★★★ Julie and Sarah were fantastic to work with in selling my home. They were extremely knowledgable about the market and responsive throughout the whole process. They did great work staging and marketing my home. They smoothly took care of any complications that arose and were always on top